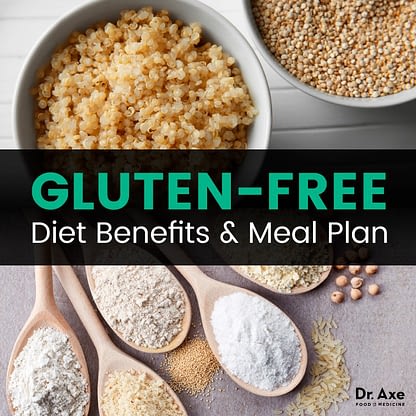 In just the last few years alone, the gluten-free diet has skyrocketed in popularity. In fact, it seems like just about everyone is avoiding gluten — regardless of whether or not they really need to.

Gluten-free foods have become synonymous with healthy eating, right alongside all things sugar-free, dairy-free and low-carb. But what is gluten, why is gluten bad and do you really need to take it out of your diet?

For some, cutting gluten out of the diet can come with big benefits when it comes to health. A gluten-free diet, much like a gluten-sensitivity diet, could amp up fat burning, provide a burst of extra energy, reduce inflammation, and ease digestive symptoms like gas, bloating or diarrhea. For others, going gluten-free could even be the key to reducing behavioral issues and improving symptoms of autism and irritable bowel syndrome.

Gluten is found in many food sources, and there are foods with gluten that you might not suspect. While adopting a gluten-free diet sounds like it may be a daunting task, it certainly doesn’t have to be. By incorporating a few gluten-free foods into your diet, it can be simple to reap the rewards of a gluten-free diet.

What Is Gluten and How Do You Keep It Out of Your Diet?

Gluten is a type of protein found in grains, such as wheat, barley and rye, that is responsible for giving foods elasticity and providing a chewy texture. It is also often added to other foods to modify the stability and structure of products, such as salad dressings, condiments and deli meats.

Many people have a gluten intolerance or sensitivity, which can cause a slew of negative side effects when gluten is consumed from digestive issues to mood changes.

Some people also have celiac disease, which is an autoimmune condition. When people with celiac disease eat foods with gluten, it triggers an immune response that causes damage to the lining of the small intestine. This can cause malabsorption and nutrient deficiencies, along with celiac disease symptoms like diarrhea, malnutrition, skin rashes and fatigue.

Although gluten sensitivities were once considered obscure, it is now estimated that gluten-related disorders could affect a whopping 10 percent of Americans. (1)

Cutting gluten out of your diet can be a challenge because it is widespread throughout the food supply. Oats, for instance, don’t contain gluten naturally. But do oats have gluten when you buy them from the store? Unfortunately, the answer isn’t so clear-cut. In fact, due to cross-contamination, many foods — including oats — do contain a small amount of gluten, which can cause serious problems for those with a sensitivity or intolerance.

However, for those who are sensitive to gluten, following a gluten-free diet benefits many aspects of health. Research has continued to unearth many potential benefits, from boosting energy levels to reducing symptoms of autism in children and more.

Digestive issues like bloating, gas and diarrhea are some of the hallmark symptoms of gluten sensitivity, along with other side effects like fatigue and mood changes. Additionally, some of the typical symptoms for celiac disease include nausea, vomiting, flatulence and diarrhea.

If you experience any of these issues after eating foods with gluten, cutting them out of your diet could significantly help reduce your symptoms.

A study in the American Journal of Gastroenterology looked at the effects of gluten on adults with non-celiac gluten sensitivity. After eating gluten daily for six weeks, participants reported a worsening of symptoms like poor stool consistency, pain, bloating and fatigue. (2)

If you regularly experience adverse digestive side effects after eating gluten-containing foods, consider an elimination diet to determine if a gluten-free diet could help provide long-term relief.

Some people report feeling tired or sluggish after eating foods with gluten. If this is the case for you, a gluten-free diet plan could provide some extra energy and prevent the brain fog and fatigue that may come from eating gluten.

Celiac disease can also cause nutrient malabsorption, which could also be at the root of fatigue. For individuals who suffer these symptoms, eating gluten can trigger an immune response that causes your immune cells to attack the lining of the small intestine. Over time, the damage caused to the lining can impair the absorption of certain nutrients, making it difficult to get the proper nutrients needed to maintain energy levels. In particular, reduced levels of iron, folate, vitamin B12, vitamin D, zinc and magnesium are all often seen in patients not on a proper celiac disease diet.

Iron deficiency is especially common in those with celiac disease. This causes iron deficiency anemia, a condition that is characterized by a lack of healthy red blood cells, resulting in fatigue, lightheadedness and low energy. (3)

If this is the case for you, removing gluten from your diet could help increase your energy levels and prevent the drained, sluggish feeling that can accompany gluten consumption. Remember to fill your gluten-free diet with plenty of nutrient-dense foods to close any nutritional gaps and keep energy levels up.

3. Could Benefit Children with Autism

Autism is a developmental disorder that causes impairments in communication and social interaction. Although autism affects people of all ages, most cases are identified within the first two years of life.

Traditional treatment for autism includes the use of different types of specialized therapy along with medications. However, promising new research has shown that eliminating gluten from the diet could help reduce symptoms of autism in children when used alone or in conjunction with conventional treatment methods.

A study in Nutritional Neuroscience, for example, found that strict adherence to a gluten-free, casein-free diet led to improvements in autism behaviors, physiological symptoms and social behaviors, according to parents. (4)

Another study out of Iran reported that a gluten-free diet decreased gastrointestinal symptoms and significantly decreased behavioral disorders in children with autism. (5)

Other autism natural treatments include using supplements like fish oil, digestive enzymes and probiotics, along with a healthy diet high of additive-free, unprocessed foods.

When those with celiac disease continue to consume gluten, it can contribute to widespread inflammation in the body over time. Inflammation is a normal immune response, but chronic inflammation may be linked to the development of chronic diseases like heart disease and cancer.

If you have celiac disease, a gluten-free diet could help you avoid inflammation and prevent harmful health consequences that could occur as a result.

However, more studies on humans are needed to determine whether a gluten-free diet can help reduce inflammation in humans, including those with and without celiac disease.

In addition to reducing symptoms like digestive issues and fatigue, some research has also found that following a gluten-free diet may help promote fat loss.

A 2013 animal study reported that mice given a gluten-free diet showed reductions in body weight and fat, even without any changes in food intake. They also had increases in specific receptors and enzymes that enhance the breakdown of fat. (8)

Another animal study in the International Journal of Obesity found that eating wheat gluten increased weight gain by decreasing the energy expenditure of fat tissue. (9)

Still, it remains unclear whether this same effect may be true for humans. More studies are needed focusing on the effects of gluten on body weight and body fat on humans specifically.

Irritable bowel syndrome, or IBS, is an intestinal disorder that causes digestive symptoms like bloating, gas, constipation and diarrhea.

A low-FODMAP, IBS diet is often recommended as a first-line defense against IBS. This is a diet low in short-chain carbohydrates, which are not digested but instead fermented by the bacteria in the gut. Reducing your intake of these foods could help sidestep some of the negative symptoms of IBS. (10)

Gluten-containing grains contain oligosaccharides, a type of short-chain carbohydrate that is easily fermentable in the gut, and are restricted on a low-FODMAP diet.

A study in the journal Gastroenterology compared the effects of a gluten-free and gluten-containing diet on participants with diarrhea-predominant IBS. Interestingly, researchers found that those eating gluten had increased bowel frequency and intestinal permeability (or leaky gut) compared to those on a gluten-free diet. (11)

Ready to start tackling a gluten-free diet? It may sound intimidating at first, but by including a few foods from this gluten-free foods list, building up your collection of gluten-free diet recipes and taking advantage of some of the gluten-free technology at your fingertips, it can actually be pretty simple.

To completely remove gluten from your diet, label reading is key. However, you’re unlikely to find “gluten” listed on any ingredient label. Instead, avoid foods that contain these ingredients:

Additionally, look for foods that are labeled as certified gluten-free, as this ensures that a product is free from gluten as well as cross-contamination.

Gluten can also be found in many cosmetics as well as hair products. However, most researchers agree that this is not likely to cause adverse side effects unless found in products that can easily be ingested, like lipstick.

However, the question of “what does gluten-free mean” can have different answers for different people. While some opt only to eliminate gluten from food sources, others decide to remove it altogether. If you do decide to go gluten-free with your personal care products, there are many good resources available online for finding gluten-free brands.

Here is a list of naturally gluten-free foods that are nutrient-rich and excellent dietary additions:

Bread and baked goods may be the first things you think of when asked “what is gluten,” but there are plenty of sneaky sources of gluten out there as well. If you’re just starting a gluten-free diet, make sure to check the label of these products to make sure they don’t contain hidden gluten:

If you suspect that you may have celiac disease or gluten intolerance, talk to your doctor to see if an elimination diet or genetic testing is an option for you.

If you do follow a gluten-free diet, make sure that the rest of your diet is well-rounded and nutritious. Gluten-containing grains pack in plenty of essential nutrients, so it’s important to make sure you’re meeting your nutritional needs and filling any gaps with other nutrient-rich foods.

A gluten-free diet for kids is not advisable unless medically necessary or done under the supervision of a doctor or dietitian, as it can be lacking in important nutrients if not properly planned.

Additionally, keep in mind that rice contains arsenic and mercury, heavy metals that can be harmful in large amounts. While rice is OK from time to time, make sure you’re eating a wide variety of gluten-free grains instead of just swapping your pasta for rice. (12)

Final Thoughts on a Gluten-Free Diet

How to do Donkey Kicks? Step-by-step