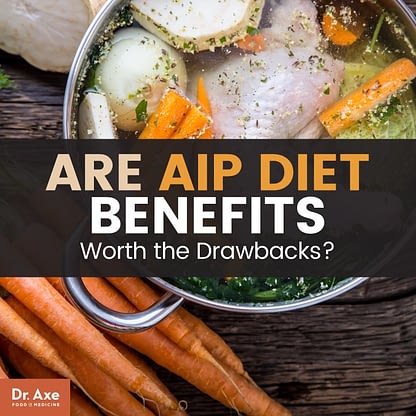 At just 38 years old, Sandra Dorst was diagnosed with antisynthetase syndrome, a rare autoimmune condition that affects the connective tissue. A few years after her diagnosis, she had made major strides in terms of her health thanks to the help of modern medicine but was still left with debilitating autoimmune disease symptoms like daily joint pain, fatigue and brain fog. When she finally decided to try out the AIP diet, or autoimmune protocol, it made a huge impact on her life.

For those with an autoimmune disease, managing symptoms and getting back to feeling like yourself can be a challenge. Treatments can range from immune-suppressing medications to surgical procedures and long-term lifestyle changes.

For Sandra, a strict autoimmune diet was the only thing that was able to reduce the fatigue and brain fog, giving her control of her life again and giving her husband and children back the wife and mother they used to know.

Less than a year after making the decision to try out the AIP diet, Sandra says that it turned her life around. She even went on to create ShopAIP, a company dedicated to providing AIP-compliant products to help others struggling with similar symptoms achieve the same results that she did.

Although it can be restrictive, complicated and difficult to follow, the AIP diet may be able to manage symptoms and improve quality of life for those with an autoimmune disease.

What Is the AIP Diet?

Autoimmune diseases cause the immune system to attack the healthy cells in your body. Rheumatoid arthritis, lupus and celiac disease are just a few examples of some of the more common autoimmune conditions.

Autoimmune diseases can cause damage to the lining of the small intestines, resulting in increased intestinal permeability, or “leaky gut.” This allows food and waste products to enter the bloodstream, resulting in inflammation.

The autoimmune protocol diet, or AIP diet, focuses on healing the gut by eliminating foods that cause inflammation to reduce symptoms in those with an autoimmune disease.

For the first few weeks, the diet should be strictly followed. After this period, you can begin slowly introducing foods back into your diet and monitoring whether they trigger any adverse side effects.

Is the Autoimmune Protocol Necessary and Does It Work?

Food can affect the severity of symptoms for many people with autoimmune conditions. In fact, one 2017 survey showed that 24 percent of participants with rheumatoid arthritis reported that their diets had an impact on symptoms, with certain foods causing them to either improve or worsen. (2)

The AIP diet may not be necessary for everyone, though. For some, lifestyle changes like reducing stress and getting enough sleep can manage symptoms effectively without having to make major dietary changes.

However, if you suffer from an autoimmune disease and find that your symptoms are affected by the foods that you eat, the autoimmune protocol diet could be the key to keeping your symptoms under control and finding which foods trigger symptoms for you.

Not only does this diet cut out the foods that promote inflammation, but it also encourages the consumption of nutrient-dense foods and foods rich in anti-inflammatory omega-3 fatty acids.

The AIP diet shares many similarities with the Paleo diet, including many of the foods that are restricted and allowed on each diet. In fact, the AIP diet is sometimes even referred to as the autoimmune Paleo diet. However, there are also some important distinctions between the two diets.

First, however, it’s important to define what is the Paleo diet. Stemming directly from the Paleo definition of “older or ancient,” the Paleo diet is based off of how our ancestors ate during the Paleolithic Age. The diet eliminates all forms of legumes, dairy, soy and grains and focuses primarily on meat, fish, nuts and vegetables.

The autoimmune diet takes it a step further, however, and also eliminates several Paleo diet foods. On the AIP diet, for example, nuts, seeds, eggs and nightshade vegetables are prohibited.

First and foremost, the autoimmune inflammatory diet is a healing diet meant to restore the integrity of your gut and reduce inflammation to alleviate symptoms. For those with an autoimmune disease, this can make a world of difference when it comes to restoring quality of life.

Research has found that the diet can have a significant influence on the beneficial bacteria in your gut, which may impact symptom severity for those with an autoimmune disease. (3)

The AIP diet can also help you learn more about your body and which foods may trigger symptoms for you. Although it can be a challenging diet to follow, learning which foods you should cut from your diet can be incredibly valuable.

The diet also prioritizes nutrient-rich, unprocessed and anti-inflammatory foods, such as vegetables. Regardless of whether or not you have an autoimmune disease, we can all benefit from including more of these nutritious foods in our diets.

Take a look at the long list of foods to avoid and it becomes clear almost immediately that this diet is extremely restrictive and can be difficult to follow. With rules about everything, from the types of vegetables you can eat to the spices that you should put on your food, adhering to a strict AIP diet is not easy.

Finding foods that are AIP-compliant can also be tedious and time-consuming. Even armed with an autoimmune diet shopping list, trips to the grocery store can require extra time for reading labels to ensure food products are free of prohibited ingredients. Although online resources and stores targeted to the AIP diet are out there, finding food products that are compliant can still be a challenge.

Additionally, food is just one piece of the puzzle. Most autoimmune disorders require medical attention along with other lifestyle changes, like exercise, setting a regular sleep schedule and even moderating sun exposure. While an AIP diet may help you identify which foods trigger symptoms for you and can improve your quality of life, it shouldn’t be treated as a cure-all on its own for your autoimmune disease.

If you have an autoimmune disease and are generally stable with just a few lingering side effects, an AIP diet might work for you to help find if there are any foods that could be triggering your symptoms. The diet works best when you are mostly stable because it’s much easier to determine how much of an impact the diet may have on your symptoms versus other factors.

However, keep in mind that this diet is highly restrictive and not everyone with an autoimmune condition needs to strictly follow it.

For example, some people may have a reaction to grains but do perfectly fine with other foods like dairy products, legumes and eggs. In that case, simply remove grains from your diet instead of cutting out all of the food groups on the AIP diet.

Furthermore, there can be a lot of factors that could play a role in autoimmune conditions besides food. Stress, sleep patterns, exercise and even hormone levels can all contribute to symptom severity, so most people will need to look beyond the diet and make other healthy lifestyle changes as well.

The AIP diet is a very restrictive diet with a long list of foods to avoid. On this diet, you should eliminate the following foods from your diet:

At this point, you may be wondering what can you eat on the autoimmune diet. Although the list of foods to avoid is extensive, there are also many foods that are permitted. On the AIP diet, you should be filling your plates with lots of meats and vegetables. Foods that are allowed on the diet include:

Additionally, recommendations regarding fruits vary. While some sources believe that one to two pieces of fresh fruit per day should be permitted, others recommend cutting out fruit from the diet altogether.

The regimen should be followed strictly for the first few weeks, and then foods can be gradually added back in. Try introducing one new food in small amounts every five days, and keep track of any symptoms you may experience.

During the first few weeks of this diet, finding a compliant AIP diet breakfast, lunch and dinner as well as AIP diet snacks can be difficult. However, eating well on this diet doesn’t have to be tedious or challenging. Here are a few simple recipes to get you started:

The AIP diet can be traced back to scientist Dr. Loren Cordain, who noted that many foods allowed on the Paleo diet — such as nuts, seeds, dairy products, eggs and nightshade vegetables — could trigger symptoms in those with an autoimmune disease.

In 2010, former research biochemist and health expert Robb Wolf wrote about the AIP diet in his book, “The Paleo Solution,” in which he framed it as a 30-day diet where certain foods are eliminated and then slowly reintroduced back into the diet to assess tolerance.

Shortly after, Dr. Sarah Ballantyne began writing about the AIP diet on her website, The Paleo Mom. Today, she is considered one of the leading experts on the autoimmune protocol as well as the intricate link between autoimmunity and diet.

Keep in mind that the AIP diet should be used as a tool to understand which foods may trigger symptoms for you, but it doesn’t mean that you need to eliminate all foods on the diet permanently. In fact, there are many foods restricted on the diet that can provide important nutrients and can be healthy dietary additions, as long as they don’t cause any negative symptoms.

Additionally, remember that there is no single best lifestyle and diet for autoimmune disease. Certain factors may affect people differently, but the purpose of this diet is to gain an understanding of how specific types of foods may affect you and your symptoms.

If you have tried the AIP diet and are still experiencing negative side effects like fatigue, joint pain or swelling, talk to your doctor and see if there may be other lifestyle changes that you should consider to improve symptom severity.

The Blood Type Diet: Are There Any Real Benefits?