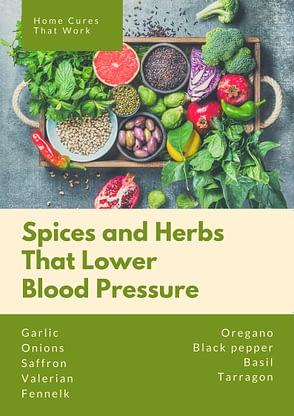 If you have been diagnosed with high blood pressure and you’re seeking a natural treatment, herbs are a reliable solution. Some of these herbs have been used for centuries (at the very least). All seven have been studied by modern clinical researchers and proven to lower high blood pressure.

“In double-blind studies with garlic preparations providing a daily dose of at least 10 mg allicin, blood pressure readings dropped with typical reductions of 11 mm Hg for the systolic and 5.0 in the diastolic within a 1 to 3-month period. To get enough allicin, eat 1 to 4 cloves of fresh garlic a day.”1

Hawthorn berries have been used in TCM for thousands of years. Today, hawthorn berries are primarily used to treat diseases of the heart and blood vessels, which includes both high and low blood pressures.

Hawthorn lowers high blood pressure (and raises low blood pressure) by optimizing the amount of blood being pumped out of the heart during contractions, widen blood vessels, and increases the transmission of nerve signals. It also relaxes blood vessels farther from the heart. This e ect has been credited

“Cat’s claw has also been shown to inhibit platelet aggregation and blood clot formation. This means that cat’s claw could likely be helpful in warding o heart attacks and strokes by not only decreasing blood pressure and increasing circulation, but by also inhibiting the formation of plaque and blood clots in the arteries, heart and brain.”2

Lavender is able to reduce pressure when used internally as an infusion (tea) and externally as an essential oil (aromatherapy). Studies have shown that massaging the body with lavender oil can reduce blood pressure by 50%. Researchers have hypothesized that lavender’s ability to dilate arteries and relax body and mind is a result of its antioxidants and other organic compounds.

“Lavender works as a vasodilator by relaxing and expanding the blood vessels, thereby causing the blood pressure to lower.”3

Lavender oil can be diluted in a bath or a base oil for application anywhere on the body. As a tea, only a small amount of lavender owers are needed. This is why you’ll often nd lavender in combination with one or more herbs (usually chamomile). In addition, lavender is a culinary herb. The owers can be used in baked good and the leaves can be used as you would rosemary.

“… it does seem that cinnamon reduces the amount of circulating insulin, which may explain why it’s e ective for those with diabetes. It was found that a half a teaspoon a day is enough to reduce your blood pressure levels.”4

Cinnamon can be used freshly shaved and added to the foods you eat each day, but cinnamon supplements (created using fresh cinnamon) have also proven e ective.

Warning: For some people, using large amounts of cinnamon can cause ushing and irritate their GI tract, the lining of their mouths, and even cause gingivitis. So, start with a very small amount and slowly increase your intake until you are consuming 1⁄2 teaspoon per day. Also, avoid Cassia cinnamon (Cinnamomum aromaticum) for medicinal use. The cassia plant contains Coumarin, which is toxic in large doses.

Yarrow is legendary for its ability to heal wounds, but clinical research studies have proven yarrow’s ability to lower blood pressure as well. A study published in the journal Phytotherapy Research proved yarrow lowered blood pressure by acting as a vasodilator.

“These results indicate that Achillea millefolium exhibits hypotensive, cardiovascular inhibitory and bronchodilatory e ects, thus explaining its medicinal use in hyperactive cardiovascular and airway disorders, such as hypertension and asthma.”5

And, according to the University of Maryland Medical Center, yarrow can strengthen the e ects of prescription blood pressure medicines; which can be good or bad, depending on whether the drugs you’re taking are e ective or not.

Always err on the side of caution

When using any new herb or supplement for the rst time it’s important to use the smallest useful dose to start, regardless of how much is actually needed for optimal e ect. Taking a slow and cautious approach will help protect your health should you prove allergic to the herb or supplement. And always consult your doctor before taking an herb or supplement that may interact with your medication.

Well being Issues: Delivering the flu immunisation programme in the course of the COVID-19 pandemic